This post was also published on The Center for Basque Studies Blog.

This semester Center for Basque Studies student, Kerri Lesh, was awarded a Bilinksi Fellowship for 2018-2019 by the College of Liberal Arts. She has been the first student from the Center for Basque Studies to be awarded a Bilinski Fellowship. A reception was held for the eight awardees who were announced May 3rd. Associate Dean Jane Detweiler presented the awards after a short welcome speech provided by Dean Debra Moddelmog. The previous year’s recipients were present to share their work with a poster presentation as they noshed on cookies and fruit.

Kerri was awarded $30,000 to support her in writing her dissertation, which focuses on the use of Euskara alongside the marketing of local gastronomic products of the Basque Country. 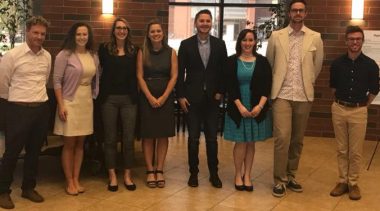 Russell J. and Dorothy S. Bilinski’s goal in life was to be independent and challenged intellectually. They strongly believed in people being self-sufficient, ambitious, and above all, responsible. Both Russell and Dorothy were true intellectuals, as well as being adventuresome, independent and driven. Russell was a researcher, academician, and an entrepreneur. Dorothy was an accomplished artist and patron of the arts. Russell and Dorothy believed that education was a means to obtain independence, and this is the legacy they wished to pass on to others.

In furtherance of that goal, when Russell and Dorothy died, they left a significant gift for the formation of a nonprofit corporate foundation. The Bilinski Educational Foundation seeks to fulfill this legacy by providing fellowship funds for post-secondary education for students who have demonstrated, and are likely to maintain, both the highest academic achievement and good moral character, but who lack the financial resources to complete their post-secondary education.

View all posts by txakolina81